The Grand Old Toronto Carnival Parade. Hang on to your feathers

Sure the parade is in its 52nd year and it is very much the same old same old. However, there are additions and changes to the grand old Grand Parade that spectators should be aware of to get the most out of the August 3rd world famous road march.

First of all the parade is bigger, noisier and longer than last year – the route is 8km in length almost twice the distance in2018. The parade is larger and will take much longer to play out along Lakeshore Blvd and in the Exhibition Place grounds. Third, the pan orchestras are back in the parade and will certainly make themselves heard above the roar of the crowd.

Chris Alexander the head honcho at the carnival office spoke to the Caribbean Camera about the changes and upgrades to the Saturday parade.

The bands, beginning at 9.30 am will present themselves in this order: guest bands, competitive bands and then non-competitive bands. Steel bands will round out the parade. Everyone (and there are thousands and thousands participants) will leave Exhibition Place, go westbound on the Lakeshore for about two kilometres before turning and coming back eastbound on the Lakeshore back to Exhibition Place to be judged. The first Band should be arriving at the judge’s stage at about 11:30.

There will be six zones for spectators and masqueraders, one of which will be a paid area in close proximity to the judging area.

Trust us - come early and stay late. The actual parade will start about 9.30 am, with the ribbon cutting ceremony taking place around 10.30. The Caribbean Camera has not been told what VIPs will be at the kick-off but we do know that His Imperial Majesty Ooni Adeyeye Babatunde Ogunwusi (Ooni of Ife) has announced he will be there and is bringing culture and diversity in unity to this year's Toronto Caribbean Carnival!

Most of the big bands will be on the road in the late morning and early afternoon. The non-competing bands and pan orchestra will bring up the rear. The last band is expected to cross the line at 6.30 and the pan groups an hour later. The parade will end, or so they say, at 8pm! 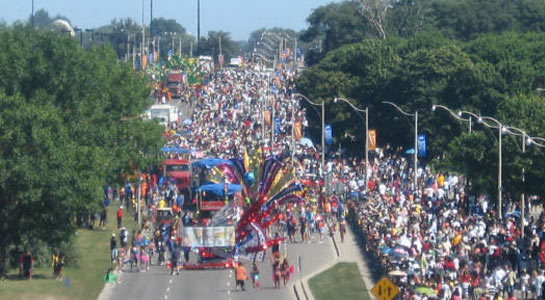 The organizers have saved the best for last!Bringing up the rear will be world travelling Trinidadian jazzman Etienne Charles who is going to put the dingolay into next week’s Toronto Caribbean Carnival. Earlier this month the trumpeter called the paper from Spain to say that he was going to lead the last non-competing Mas Band in the Carnival’s grand parade. When you hear his trumpet coming down the road you will know the Mas portion of the parade is just about over (but stick around for Pan).

“ No big surprise, I am calling the band Etienne Charles Brass Band!” he told Stephen Weir. “The band is about reviving the tradition of live brass bands on the road for Carnival. A tradition we have revived to great effect in Trinidad.”

The FMC does charge admission in most of Exhibition Place and parts the parade route - $15 for kids, $20 for seniors and $25 for everyone else. VIP tickets can be purchased which give premium viewing and food options.

There is always free viewing along Lakeshore, but, it is a long circuitous route to get from the Go and TTC stations at the north side of Exhibition Place past the pay areas and down to the Lakeshore. It is an onerous walk for families with little children, seniors and people with vision and mobility issues. There are very tall chain link fences separating the audience from the masqueraders.

At costume launches the FMC made several ominous warnings to revellers and parade goers to respect the Mas (don’t storm the fences) and to not bring weapons to the festival. When one hears that type of warning there is an implication that weapons are routinely carried so we hope that people will take the FMC advice. Rest assured there will be police, private security and parade marshals.

There will be many opportunities on the grounds of Exhibition Place and along the Lakeshore to purchase water, alcohol and mouth watering Caribbean food. Of course because of changes in the law, expect to smell the sweet smell of ganga in the air.