Three Passengers Share Their Stories of Neglect and Disregard by SVG Air Following on From The September 29th, 2021 Runway Incident on Montserrat

On September 29th 2021, passengers onboard an SVG Air flight heading in to land at the John A. Osborne Airport on Montserrat had to undergo the traumatic experience of a brake failure on the aircraft after touchdown, which resulted in the SVG plane veering off the runway with significant damage done to the aircraft.

A recent Air Accident Investigations Branch (AAIB) report outlined the cause of the break failure: “When the pilot applied the brakes on landing, a leak from one of the pistons of the left outboard brake calliper rendered the left brakes less effective than the right, causing the aircraft to veer to the right and depart the runway. Difficulty in maintaining directional control was compounded by the limited size of the runway and the use of an incorrect braking technique on landing. The investigation identified shortcomings with the operator’s manuals, procedures and regulatory oversight”.

In recent days, MNI Alive has been looking into issues to do with respect for human dignity; professional conduct and also consideration and regard for the mental health and wellness of passengers who have had to undergo deeply stressful aircraft incidents to do the two airlines that service Montserrat.

Three of the passengers that were on that flight on September 29th, 2021, after months of seeking remedy from SVG Airlines following on from the  incident -  they have decided to come forward and share their deep distress that a year on from this terrible incident, SVG’s management have essentially turned a blind eye and left them to deal with their trauma all on their own.

To recap what the passengers had to endure, view the video footage below shared with MNI, on the approach to landing on Montserrat, with the moment the aircraft veered off the runway. (Note: the video footage may be disturbing for some to view)

The three passengers who have come forward to share their story of their experience and of SVG’s neglect and disregard are Dawne Kirwan, Gestina Frith and Landa Meade.

It is important to note that these ladies found it extremely difficult to share their experiences. However, they thought it was important to come forward in the quest for ownership of responsibility by the Management of SVG Air for the aftercare and wellbeing of the 6 passengers that were on that flight, who had to suffer mental distress, loss of personal property and also personal bodily injury following on the aircraft veering into the mound at John A. Osborne airport.

One passenger tells MNI Alive that initially after the crash a representative of SVG Air did reach out and informed them that they would be hearing from the company’s insurance agents. The agent did indeed make contact with some initial inquiries made but nothing further since and still no resolution. Also, in January, 2022, SVG Air's Executive, Paul Gavel,  reached out to one of the passengers but since then there has been no further communication or any gesture of good faith made to the passengers who were on that SVG flight.

It appears to be a pattern on Montserrat, that passengers who have had to undergo the trauma of aircraft incidents to do with the two airlines servicing the island are left up to their own devices to figure out their aftercare and work through their post-traumatic stress all on their own.

Listen below as one of the passengers, Dawne Kirwan, speaks of her experience during the incident and the response from SVG that followed:

According to the Air Accident Investigations Branch (AAIB) report on this SVG incident, it is believed that the leak that caused the brakes to fail might have been caused by the replacement of the brake pads on that particular aircraft the previous night. The report further states that the brake pressure was not tested before landing of the aircraft, which is something the pilots are trained to do.

The AAIB report states: “Examination of the left brake components determined that the ‘spongy’ feel and lack of effectiveness reported by the pilot was most likely due to a slight brake fluid leak from one of the pistons in the left outboard brake calliper. This leak prevented full brake pressure being achieved and therefore reduced the braking effect from the left brakes.” 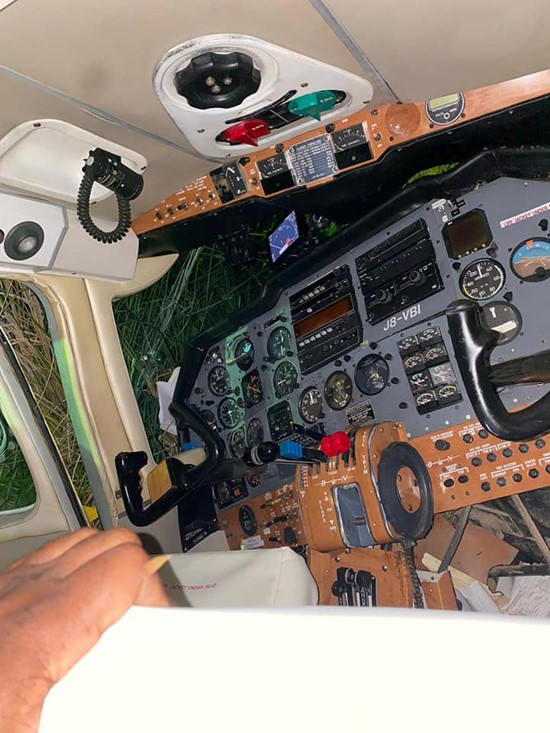 MNI attempted to reach out to SVG Executive Paul Gavel on October 4th, towards which we inquired what assistance had been given to passengers on that flight since the plane veered off the runway?

To date, no response has been returned.

Landa Meade, who was one of the passengers onboard that fateful flight on September 29th  suffered a broken wrist. She tells a sad tale of being ignored by the airline and also the treatment received from the authorities on Montserrat. Listen to Landa’s recollection below:

It is clear from the two recollections shared so far that there is a profound case of mistreatment of passengers who were on this SVG flight. In addition, it would appear that there are no procedures in place from a Governmental level for passengers of such aircraft incidents to seek redress from the airlines.

Gestina Frith is the final passenger who’s story we will share about her experience on that dreadful day:

Very much as with Fly Montserrat and their recent string of mishaps, passengers of SVG Air are also being met with silence and what would appear to be a total showing of disregard and for the passengers recovery and wellbeing.